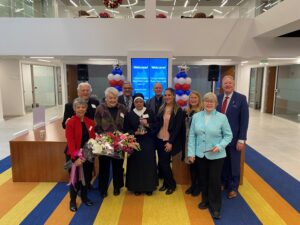 Lazarus, who is the Director of the Office for Hispanic Ministry for the Diocese of Norwich, received the award at a presentation attended by Liberty Bank teammates, Board members and her friends and family.

“In choosing the recipient of the award, we look not just for people who have given their time in service to community organizations, but for those who have made it their mission to promote diversity, equity and inclusion,” said David W. Glidden, President and CEO of Liberty Bank. “Sister Mary Jude has devoted her life to promoting and protecting human rights, seeking social justice and equal opportunities for all.”

Introduced in 2001 as the Liberty Bank Community Diversity Award, this award was renamed in 2009 in honor of Willard M. McRae, a past chairman and board member of Liberty Bank. It is designed to recognize an individual who has been a leader in the communities served by Liberty Bank in connecting people who are different—whether those differences are of religion, race, ethnicity, economic status, age, or any other aspect of diversity.

As this year’s award recipient, to the Liberty Bank team is making a $5,000 charitable donation to a nonprofit organization of her choice.  She selected Holy Family Home and Shelter in Willimantic. As another way of giving back and recognizing Sister Mary Jude, a group of Liberty Bank teammates will also be volunteering at Holy Family Home and Shelter on Friday, December 10 and are donating items to the Shelter for its residents.

Lazarus was nominated by Catina Caban Owen, Liberty Bank Foundation director, who said, “She shows up in life every single day with the conviction that kindness, mercy and welcoming a stranger is the strength of our nation and our mission as human beings.”

Glidden reiterated those sentiments in his own remarks, saying, “Honoring Sister Mary Jude today not only puts an exclamation point on all that we’re doing at Liberty but it gives us the opportunity to publicly recognize someone like her who shares our same values and has done so much in the communities where we operate.”

About Liberty Bank and its Foundation

Established in 1825, Liberty Bank is one of the oldest and largest mutual banks in the country. With more than $7 billion in assets, Liberty has 56 banking offices across Connecticut. As a full-service financial institution, Liberty offers consumer and commercial banking, cash management, home mortgages, business loans, insurance and investment services. Named ‘Top Workplace’ by the Hartford Courant every year since 2012 and designated a 2021 Best-In-State Bank in Connecticut by Forbes Magazine, Liberty maintains a longstanding commitment to superior personal service and unparalleled community involvement.

Since its inception in 1997, the Liberty Bank Foundation has awarded over $14 million in grants to nonprofit organizations within Liberty Bank’s market area. The foundation seeks to improve the quality of life for people of low or moderate income by investing in three areas:  education to promote economic success for children and families; affordable housing; and nonprofit capacity building.