My Favorites
/ Nonprofit is Building the Next Generation of UConn Fans

Nonprofit is Building the Next Generation of UConn Fans 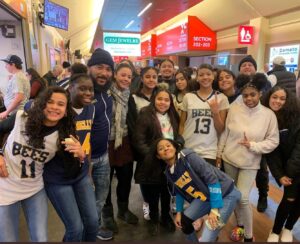 NAN PRICE: How did this idea start?

KEVIN SOLOMON: Jeremy, Kevin, and I are all University of Connecticut graduates. After graduation, we were living in New York City and couldn’t get to as many football and basketball games as we wanted to. Seeing all these empty arenas and stadiums, we wanted to do something to continue to show our support. So, we brainstormed and figured maybe we could send a few local kids in our place.

Our first year we launched in 2018, we did some fundraising and set a goal to raise $3,000. We ended up raising $6,000, which enabled us to send 300 kids to games. Starting out, we thought $3,000 was a lofty goal. Doubling our fundraising our first year proved to us that this was something other people were also interested in supporting.

NAN: Tell us about the upcoming Party on Pratt.

KEVIN: We’re partnering with the Hartford Chamber of Commerce to shut down Pratt Street across from the XL Center on December 18, right before a men’s basketball game. We’re throwing a big party on Pratt Street. It’s going to be an awesome time!

A mutual contact connected us with Hartford Chamber and thought it was a great opportunity for both of us. The event will include a silent auction, giveaways, and some fundraising.

We’ll also have a about 100 kids at the game who are able to go for free, as we do for the majority of men’s and women’s basketball games. It’s the first time fans are going to be back together for a UConn basketball game in a Big East setting, which is really exciting!

Read the entire interview at the Hartford Chamber of Commerce