Andy Bessette to be Inducted into Connecticut Golf Hall of Fame 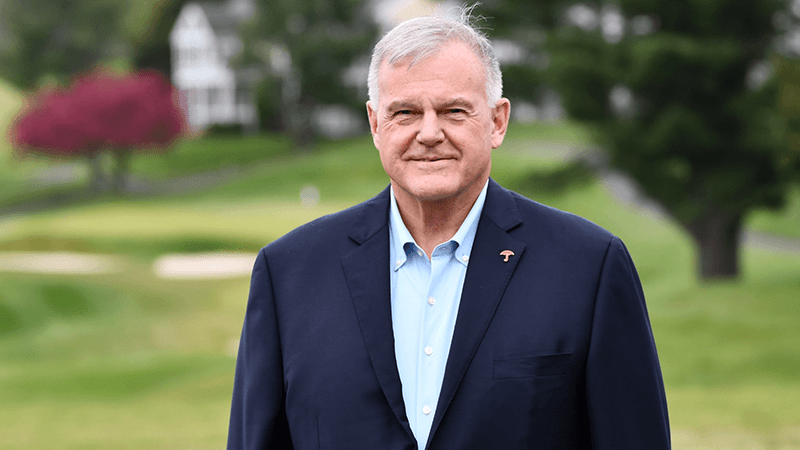 For months, Connecticut’s PGA TOUR stop was off the 2007 schedule. The tournament that began in 1952 and boasted a list of champions such as Sam Snead, Arnold Palmer, Billy Casper, and Nick Price was seemingly nearing its end.

That is when Travelers stepped in and became the title sponsor. Fast forward 16-plus years and the Travelers Championship is one of the top stops on the PGA TOUR. The person behind that relentless pursuit of excellence? Andy Bessette, the Executive Vice President and Chief Administrative Officer at Travelers.

The impact that Bessette has had on golf in Connecticut and the region is undeniable. That influence will result in the 68-year-old executive being inducted into the Connecticut Golf Hall of Fame as a member of the Class of 2022 alongside Bruce Edwards, a Wethersfield native who served as Tom Watson’s longtime caddie. The induction ceremony will take place Monday, June 20, the first day of Travelers Championship week, at the Hartford Marriott Downtown.

“I am very proud and very appreciative of the Connecticut State Golf Association’s consideration and thankful for their support,” Bessette said of the honor. “It is a great honor for me, and also for Alan Schnitzer, our Chairman and CEO; Tournament Director Nathan Grube; and everyone else at Travelers and the Travelers Championship who has been involved with the tournament. Everyone is a part of this and I am really humbled that the Connecticut Golf Hall of Fame would feel that I am worthy of this recognition.”

Bessette is the lead contact between Travelers and the PGA TOUR, managing two contractual relationships for the company. In addition to being the title sponsor of the Travelers Championship, Travelers is the Official Property Casualty Insurance Provider of the PGA TOUR.

“When the opportunity came up in 2005 or 2006, Jay Fishman, our Chairman and CEO at the time, said to me, ‘Let’s put together the deal and figure the rest of this out.’ So I put together the contract with the PGA TOUR and we announced it in early 2006, over a year before we took over,” Bessette said. “[After the announcement] I went to Jay’s office with three names of people who could oversee our title sponsorship of the Travelers Championship and he looked at me and said, ‘You are so close to it right now, why don’t you do it for the first year?’ So I did it for that first year.”

Bessette continued to present Fishman with a list of names each year. After the third Travelers Championship, Fishman said, “You just handle it forever.’’ Bessette has never looked back.

To this day, Bessette is grateful that Fishman provided him with the chance to serve as the company’s lead for the Travelers Championship. “It was really fortunate that he gave me the opportunity. That is what is important about what we do at Travelers. We give people the opportunity to grow their careers with us in the insurance industry. You can only give a person an opportunity. They then have to seize it and embrace it.”

Bessette has been seizing his opportunities with Travelers since he was presented with his first in 1980, working in the mail and supply room. With the door cracked open, Bessette began to climb the ladder and found success at each rung.

Those successes directly correlate with how Bessette operates in his role at the company supporting the Travelers Championship. Bessette is one of the few PGA TOUR title sponsor representatives who travels to events to interact with players and hear from them about how the tournament can be improved.

“Before we started in 2007, somebody said, ‘If you want to be different from every other title sponsor, be as involved as Travelers is in everything else that it does.’ And now almost 17 years later I still abide by that,” said Bessette. “We are probably the most involved title sponsor on the PGA TOUR.”

Grube, the tournament director, echoes those sentiments. “It is an absolute team effort between tournament and title sponsor regarding player relationships that we have established over the last 16-plus years. We simply would not have the players we have each year without Andy.”

Bessette grew up in Rhode Island but came to Connecticut for college, earning his undergraduate degree at the University of Connecticut, where he was an All-American hammer thrower. With a few exceptions, Bessette, who was a member of the 1980 U.S. Olympic team, has never left the state. Because of how long Bessette has lived in Connecticut, he understands just how much this event means to the state and its residents.

“People still stop me on the street and thank Travelers for saving the tournament,” Bessette said. “The one word that I use to describe what this has done for the state of Connecticut is pride. It is going to get bigger and it is going to get better. The pride is always going to be as strong as it has been.”

That pride is felt throughout the state because of the unrelenting pursuit of excellence by Andy Bessette.