My Favorites
/ Aquiline Drones Sees a Bright Future in Hartford 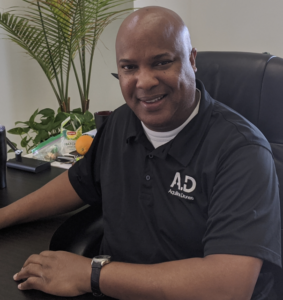 Launched in January 2019, Aquiline Drones is a drone and cloud solutions company based in the Stark Building in downtown Hartford, CT. Founder and CEO Barry Alexander spoke to MetroHartford Alliance Content Manager Nan Price about creating a drone company in a region well known for aviation.

NAN PRICE: Give us a little background.

BARRY ALEXANDER: Aviation has been in my background for about 22 years. I’ve worked in different facets of aviation on both the operational and management side of things. I’ve been an airline pilot – captain and flown all types of aircraft. I’ve also been a flight instructor, commercial helicopter pilot, and certified aircraft mechanic.

NAN: What made you transition into owning a company. And why drones?

We decided to amass the requisite resources, namely personnel, which speaks to our world-class leadership makeup. We’re made up of aviators, cloud and software engineers, algorithmic mathematicians and savvy businesspeople. We have a couple of nuclear physicists on our team, military personnel—including a decorated air force general, aerospace engineers, and a few other savvy businessman and technologists. So, most of our leadership comprise veteran aviators. And, we’re a growing company. We have 25 people in our downtown office and plan to grow to 115 by year’s end.

Our goal as a company is to ensure the safe and responsible integration of drones into society. That’s a function of safety and regulatory compliance, but also public education, helping the public to understand that drones are not gadgetry, but they are aircraft. And, as aircraft, they are prone to liability, whether it be damage to property or harm to humans. 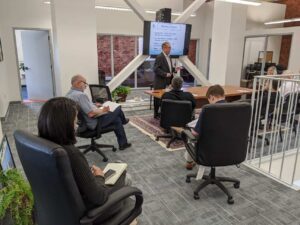 It requires a careful understanding of drones and their intrinsic benefit—they provide that third dimension that was normally reserved for birds, providing an aerial perspective you wouldn’t ordinarily have if you haven’t used the drone from multiple vantage points to give you a more holistic picture of an environment.

But outside of drones, it’s really not the drone that we celebrate in everything that we do. It’s the data or footage the drone gathers that’s of importance to us and to our clients. Drones enable us to provide those real-time data insights to the end user or customer. We can gather the data, manage, model it, store it, edit it, and provide it in a way that is consumable.

NAN: What is the benefit to having your company located here in Connecticut?

The future is bright for drones, which is the current burgeoning industry. In some of our publications, we have claimed that Hartford is becoming the drone capital of the United States. That is a claim we made based on Connecticut having such a rich history of aviation. But it’s also based on the fact that most of the activity within the drone industry is being undertaken by our company, in that we’re building an entire ecosystem—and market for drone and cloud operations.

NAN: Tell us about your workforce development collaborations.

BARRY: We’ve been collaborating with the University of Connecticut and working with Daniel Weiner, Ph.D., Vice President for Global Affairs at UConn to ensure we support the education system. We have about 15 engineering interns through that collaboration.

We’re also working with Capital Workforce Partners to secure our first wave of manufacturing employees to provide training in late October. Those employees come from all walks of life because we’re a very diverse group of individuals. We support veterans, women, BIPOC, those who have taken part in reentry programs, really anyone willing and capable to undergo our training and manufacturing efforts.

Our hope is to provide the right mix of gainful employment positions to the right groups of people. We’re creating a very robust workforce development initiative with the support of Capital Workforce Partners and some other local organizations we’re working with to ensure we provide employment opportunities here in Hartford.

We also rolled out our novel project, Flight to the Future, which is a program designed to teach a new breed of drone pilots in the United States to provide essential drone services. The program’s aspiration is to add one million new businesses to the U.S. economy with the net effect of upwards of one million employment positions. Classes started September 15 and the numbers are growing exponentially.

BARRY: We built and own the nation’s aviation-centric cloud. The Aquiline Drones cloud is drone-centric and supports just about every drone operation out there from a management standpoint, as far as command and control, enterprise asset management, flight control, everything from A to Z.

Our cloud is unique in that it’s modular and totally customizable to the customer’s desires. So, if an individual wants to access cloud services to support a drone operation, it’s something we can do. We can also support small businesses or large enterprises, which can use our cloud to support their business initiatives within the ambit of drones.