Art and Activism at Tougaloo College Featured in the Amistad Center

Since its founding in 1869 by the abolitionist-led American Missionary Association, Tougaloo College has made the fight for equality central to its mission. In 1963, the college became the nexus for modern art in Mississippi, when leaders of the New York art world began a rich program of art acquisitions.

Co-organized by the American Federation of the Arts and Tougaloo College, Art and Activism at Tougaloo College examines the birth and development of this unique collection—the first in Mississippi dedicated modern art. Created as civil rights protests swirled across the fiercely segregated state, the collection was envisioned as “an interracial oasis in which the fine arts are the focus and the magnet.”

Comprised of approximately thirty-five artworks in a range of media by artists such as David Driskell, Francis Picabia, Elizabeth Catlett, Alma Thomas, Pablo Picasso, Richard Mayhew, Charles White, and Hale Woodruff, the exhibition gives insight into a complex American collection established at the intersections of modern art and social justice.

The Amistad Center for Art & Culture graciously thanks Millard H. & Claire M. Pryor and Family, Travelers, and The Hartford for their generous support.

The Amistad Center for Art & Culture’s galleries are on the second floor of the Wadsworth Atheneum.  Free with admission to the Wadsworth Atheneum and open to the public on Thursday through Sunday, 12 p.m. – 5 p.m. Admission is free for Hartford residents and on the Second Saturday of each month between 12 p.m. to 2 p.m. 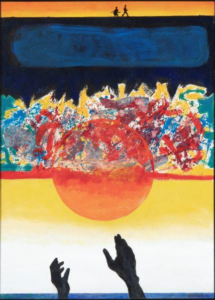