Conversation With Mayor Focuses on Rebuilding and Reengaging With Hartford 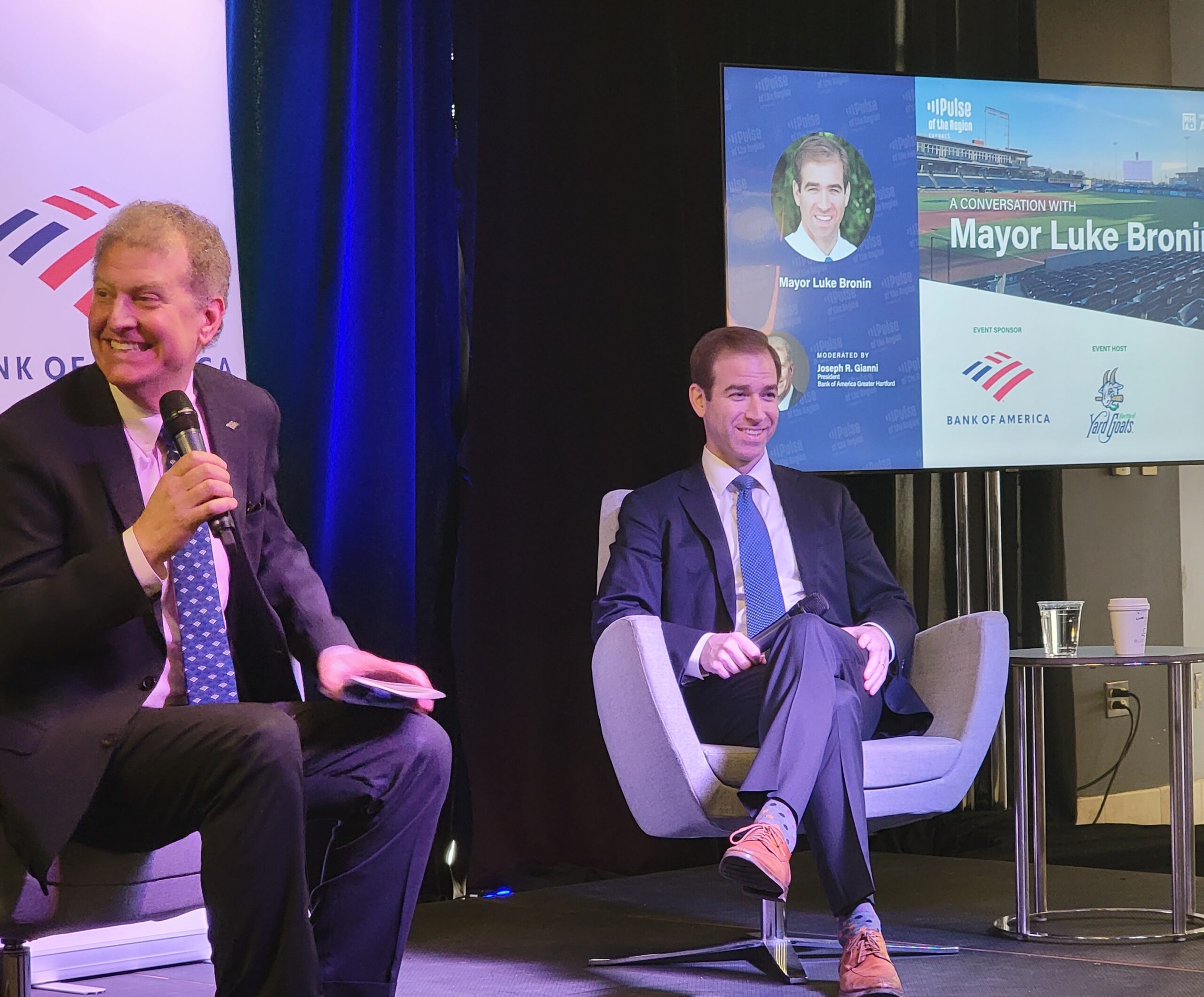 It’s been a long time coming. The last time the MetroHartford Alliance (MHA) hosted an in-person Conversation with Mayor Bronin was just days before the pandemic lockdown. The latest event took place Tuesday, April 5 at the YG Club at Dunkin’ Donuts Park. Event attendees were overjoyed to engage face-to-face and be fully present—even “without the option to be muted,” as event moderator and Bank of America Greater Hartford President Joe Gianni joked.

Coming off the heels of the mayor’s state of the city address—where he focused on patience, perseverance, and partnership—the timing was great to engage in a follow-up conversation.

In terms of 2020, Mayor Bronin acknowledged that so much has changed since the MHA’s last breakfast event, when Hartford showed “tremendous momentum” and “it felt like we were finally firing on all cylinders.”

Mayor Bronin talked about how the city focused on health efforts and made investments in public and community safety early in the pandemic. The mayor thanked the Hartford Yard Goats for their dedication to providing a space for vaccinations and thanked partnerships across the board. He touched upon the American Rescue Plan usage of resources and how they were used to address urgent needs exacerbated by pandemic.

Mayor Bronin also mentioned how proud he was of the community’s efforts to support one another and voice their opinions, particularly relating to protests organized after the murder of George Floyd.

With an eye toward the future, the mayor says he’s optimistic about recovering momentum. “We’ve been here before—we’ve recovered from financial crisis and created momentum.”

What’s next for Hartford? Mayor Bronin gave a nod to the Hart Lift program (an initiative by the Hartford Chamber of Commerce) and recognized small business owners, Parkville Market, and developments on Albany Avenue, emphasizing that these efforts are “creating an exciting pipeline.”

Noting plans for the new library and the completion of other community projects, he added, “We’re working hard to get shovels in the ground” and encouraged everyone to check out 2035 City Plan.

There are many questions surrounding businesses in the city returning to work. “There is a recognition that you lose a lot with full remote,” the mayor said, referencing mentorship and team building, and recognizing that because “the nature of work has changed” there’s a need to “balance expectations.”

“There’s an opportunity to rebalance,” the mayor said, pointing out that with more residential development, more people are in the core of the city seven days a week. “We’ll end up with a stronger, healthier city.”

“I think it’s going to be a great summer,” Mayor Bronin said, mentioning the many opportunities to engage with arts and culture, including a variety of upcoming festivals, the activity and energy on Pratt Street, the summer concert series at Riverfront Recapture, the Yard Goats and Hartford Athletics games, beer gardens, and DominGO!, the state’s first open streets program.

The @CharterOak Foundation hosted its Annual Employer Appreciation Breakfast. Students and graduates of Charter Oak were given the opportunity to invite their boss to breakfast and nominate them for the Golden Acorn Employer of the Year Award.­

Congratulations to @HartfordHealthC, who will hold a ribbon cutting ceremony for its new offices at 100 Pearl Street tomorrow afternoon. On behalf of the MHA, welcome to downtown Hartford!