My Favorites
/ Evening with Tuskegee Airmen

The New England Air Museum is presenting a rare opportunity to spend an evening with three Tuskegee Airmen sharing stories from their service as the first African American fighter pilots during WWII. This is also an opportunity to witness a heartwarming reunion of three war heroes who served together and have not seen one another in 70 years!

At a time when Jim Crow laws enabled segregation, allowing African Americans to enter flight school was considered “an experiment.” Ultimately, they achieved excellence while defending our country, exhibiting an extraordinary will and determination to do so while being subjected to racism and segregation.

98-year-old retired Lt. Col. Harry Stewart flew 43 combat missions with the 332nd Fighter Group in the European Theater.  He was awarded the Distinguished Flying Cross after shooting down three enemy aircraft in one day.  He was also one of the winners of the very first Top Gun competition in 1949. Flying in obsolete P-47 Thunderbolts, Stewart and his Tuskegee team won against U.S. Air Force fighter groups flying far more advanced aircraft. Typical of the racism the Tuskegee Airmen faced during their service, after winning the intense competition, their medal was forgotten until finally being displayed publicly in 1995. 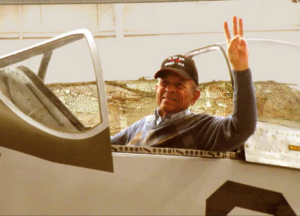 Ret. Lt. Col. George Hardy flew 21 combat missions with the 332nd Fighter Group.  He later flew 45 additional combat missions as co-pilot of a B-29 “Superfortress” bomber during the Korean War and finished up flying another 70 missions as the pilot of an AC-119 “Stinger” Gunship in Vietnam.  During his service, he earned two Distinguished Flying Crosses, a Legion of Merit, and 13 Air Medals. Despite the many honors and awards he earned, Lt. Col Hardy is outspoken about the racism he and his fellow Tuskegee Airman faced during and after their service. “After World War II, we came back, and it looked like we came back to the same thing we left.” At 96, Lt. Col. Hardy is passionate about keeping the achievements of the Tuskegee Airmen alive, not just in defending their country but also in battling racism and segregation. 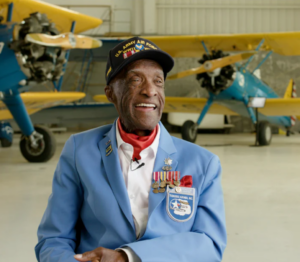 When Ret. Lt. Col. Enoch “Woody” Woodhouse enlisted at the age of 17, he was too young to be sent to battle, so he became the paymaster for his fellow Tuskegee Airmen.  From there, his incredible life of adventure began. After his discharge from active duty in Army Air Corps in 1949, he joined the Air Force Reserve and, at the same time, earned his undergraduate degree from Yale in 1952 and, later, a law degree from Boston University. He later worked as an attorney for the U.S. State Department, carrying top secret messages — including behind the Iron Curtain during the Cold War. He was also on the last flight out of Havana as communists took over Cuba. “I saw Castro waving an AK-47 from the control tower,” Woodhouse said.

The evening is a fundraiser for the Museum’s new and permanent exhibit, “The Tuskegee Airmen:  Their Untold Stories,” opening spring of 2023. The evening begins at 5:30 with hors d’oeuvres, cocktails, and a tour of the partially completed exhibit and theater.  The Airmen take the stage at 6:45 PM.  Press is invited to attend.

To see a video told through the eyes of the children, grandchildren, and friends of the Airmen and information about the exhibit, please click on this link: www.tuskegeeneam.org.

To purchase tickets to this event, please click on this link: https://neam.org/products/an-evening-with-tuskegee-airmen.

The New England Air Museum is the largest aviation museum in New England, comprised of three large public hangars, outdoor exhibits, and more than 100 aircraft ranging from early airships and flying machines to supersonic jets and helicopters. The museum is located on 36 Perimeter Road (off Route 75) on the North end of the Bradley International Airport in Windsor Locks, Conn. For more information, please visit www.neam.org, call (860) 623-3305, or find us on Facebook.