The service will operate daily through October and offer connectivity to 28 key UK and European airports, including London, Paris, Amsterdam, Berlin, Vienna, Madrid, Barcelona, Rome and Prague, plus many more. The service is expected to operate annually on a seasonal basis until year-round demand is realized from the return of business travel. 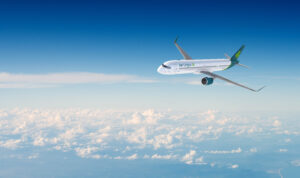 “Bradley has a reputation as being an accessible, convenient airport that makes travel for people who live throughout the northeast easier, and I am excited that Aer Lingus is bringing its popular transatlantic service back to the airport,” Governor Lamont said. “Bradley is a key economic driver for our state, and the more airlines and destinations that we can add from the airport, the more attractive Connecticut becomes to companies that are seeking to grow their own operations here. I am glad to welcome Aer Lingus back to Connecticut.”

“We are opening up key cities and regions in the United States to Irish and European customers, by adding new transatlantic routes to our schedule. Aer Lingus is forging ahead with its North American expansion plans, growing the number of transatlantic routes from its Dublin hub. The restart of the daily flight into Bradley International Airport is the only direct service to Europe, reflecting Aer Lingus’ ability to connect North American customers with Europe.” said Lynne Embleton, Aer Lingus Chief Executive.

“The Aer Lingus service has been such a tremendous asset for Bradley International Airport and our region,” said Tony Sheridan, Connecticut Airport Authority Board Chair.  “We are thrilled about this major milestone and to once again offer connectivity to Dublin, with a renewed opportunity to also showcase Connecticut to the world.”

“The resumption of the Aer Lingus route has been a major priority in our recovery strategy,” said Kevin A. Dillon, A.A.E., Connecticut Airport Authority Executive Director. “We look forward to rebuilding the service, continuing the strong momentum it had prior to the onset of the pandemic, and bringing back easy and quick transatlantic access with an award-winning airline.”

Aer Lingus inaugurated its operations at Bradley International Airport in 2016. The service was performing well and reaching growth milestones until, after nearly four successful years and thousands of passengers served, it was interrupted in 2020 due to the Covid-19 pandemic.

When Aer Lingus returns to Bradley International Airport, its nonstop service will be operated by an Airbus A321neo LR, Aer Lingus’ most sustainable long-haul aircraft. The Airbus A321neo LR, which comprises both business cabin and economy class cabin, delivers up to 20% reduction in fuel burn and CO2 emissions and close to 50% reduction in noise footprint when compared to previous generation aircraft.

Individuals traveling with Aer Lingus will also benefit from the added convenience of Dublin Airport, which offers U.S. Customs and Border Protection preclearance. This means that Bradley International Airport-bound passengers will be able to complete all necessary requirements in Dublin ahead of their departure.

Tickets for the new service are available to purchase today, with roundtrips to Ireland starting from $459 and to Europe from $659 including taxes and charges. For up-to-date information on flight schedules and fares, visit aerlingus.com.

Bradley International Airport (BDL) is New England’s second-largest airport. Recognized nationally by leading travel publications for its ease of travel, Bradley International Airport is ready to welcome you with new nonstops, expanded services and accredited COVID-19 safety measures. The award-winning airport is operated by the Connecticut Airport Authority, and its operations are entirely self-funded. The airport contributes nearly $3.6 billion to the regional economy. For more info, visit www.flyBDL.org.

About The Connecticut Airport Authority

The CAA was established in 2011 to develop, improve, and operate Bradley International Airport and the state’s five general aviation airports (Danielson, Groton-New London, Hartford-Brainard, Waterbury-Oxford, and Windham). The CAA Board consists of 11 members with a broad spectrum of experience in aviation-related and other industries, as well as government. The goal of the CAA is to make Connecticut’s airports more attractive to new airlines, bring in new routes, and support Connecticut’s overall economic development and growth strategy.

Aer Lingus was founded in 1936. In summer 2022, Aer Lingus operated over 100 routes, flying to over 71 direct routes and to 62 destinations from Ireland to the UK and Europe. Including Hartford, the airline will now operate 19 transatlantic routes from Dublin, Shannon and Manchester UK to North America and the Caribbean. Aer Lingus is a 4-star airline, awarded by Skytrax, the international air transport rating organization. Aer Lingus is a member of International Airlines Group (IAG), one of the World’s largest airlines groups. As part of IAG, Aer Lingus has pledged to achieve net zero carbon emissions by 2050 and has committed to powering 10% of its flights using sustainable aviation fuel (SAF) by 2030. For more visit www.aerlingus.com.