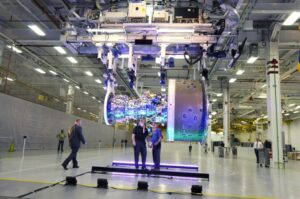 A partnership to operate two storefront manufacturing training centers in city neighborhoods to introduce potential students to manufacturing and help fill thousands of open jobs was announced Thursday by The City of Hartford and Goodwin University.With $1 million from the state, the city and East Hartford-based university will open Community Manufacturing Training Centers, one in the North End and the other in the South End, before the fall. Sites have not yet been selected.The centers will accommodate 15 to 18 students at a time and be equipped with desks, computers, white boards, tables and light manufacturing equipment. College-level courses will be offered.The city and Goodwin hope to serve 200 to 300 students a year when the centers operate, Goodwin President Mark Scheinberg said in a brief announcement at Hartford City Hall.