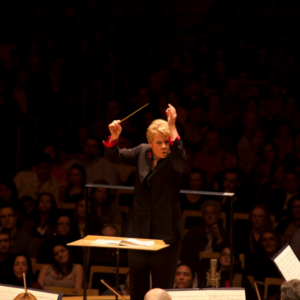 The Hartford Symphony Orchestra is hosting the New England non-theatrical online premiere of The Conductor.

From January 21-30, you can access the livestream of The Conductor, an exhilarating documentary about renowned conductor, Marin Alsop, who inspired and mentored Hartford Symphony Orchestra’s Music Director, Carolyn Kuan.

Learn more about The Conductor and listen to Carolyn Kuan’s greeting and introduction here.

Set to a breathtaking soundtrack of her performances, The Conductor tells Marin’s story through a combination of intimate interviews and shared professional and private moments, encounters with musicians and cognoscenti in the music world, unseen archival footage with her mentor Leonard Bernstein, and Vérité scenes of Marin conducting some of the world’s great orchestras and teaching the next wave of conductors who, like her, were being excluded from the classical music canon.

About the Hartford Symphony Orchestra

The mission of the Hartford Symphony Orchestra is to enrich lives and community through great music. Marking its 78th season in 2021-2022, the HSO is Connecticut’s premier musical organization, the second largest orchestra in New England, and widely recognized as one of America’s leading regional orchestras.

The HSO captivates and inspires audiences of all ages by presenting more than 100 concerts annually, including the Masterworks Series, POPS! Series, Sunday Serenades, Discovery Concerts, Symphony in Schools, Musical Dialogues, the Talcott Mountain Music Festival, and more.  The HSO aims to deliver uniquely powerful and emotional experiences that lift and transform the spirit, and to give back and help create vibrant communities in the Greater Hartford area.

The Hartford Symphony Orchestra named Carolyn Kuan as its tenth music director in January 2011; she is the first woman and youngest person to hold this title. Since beginning her tenure in 2011 she has led the HSO to new artistic heights with community-minded concerts and innovative programming.

The Hartford Symphony Orchestra was founded in 1934 and formally established as the Symphony Society of Greater Hartford in 1936. Angelo Coniglione, Jacques Gordon, Leon Barzin, Moshe Paranov, and George Heck were the Orchestra’s first music directors. With the appointment of Fritz Mahler in 1953, the HSO began its Young People’s Concerts and made several highly acclaimed recordings for Vanguard. In 1964, Arthur Winograd became music director and the Orchestra grew in artistic stature, performing at Carnegie Hall and other New York locations to highly favorable reviews. Under the artistic leadership of Michael Lankester from 1985–2000, the HSO received national recognition for its programming innovations, including the popular Classical Conversations and Family Matinees, as well as a series of landmark theatrical productions. From 2001–2011, Edward Cumming led the HSO to new levels of artistic excellence and innovative programming.

Each season, the HSO plays to audiences numbering more than 95,000 statewide. The Hartford Symphony Orchestra’s extensive array of Education and Community Activities serves 23,000 individuals in Hartford and surrounding communities annually.

To enrich lives and community through great music.