My Favorites
/ Hartford Wolf Pack at the XL Center

Star Wars night is officially here! Some of your favorite characters will be patrolling the concourse while a Padawan training will take place in the atrium. There will also be a lightsaber raffled off with proceeds going to the Ronald McDonald House. 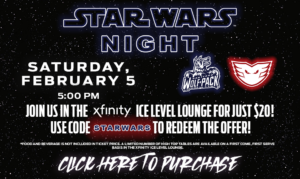 Face masks are required for all patrons regardless of vaccination status.

About the Wolf Pack

The Hartford Wolf Pack are a professional ice hockey team based in Hartford, Connecticut. A member of the American Hockey League, they play their home games at the XL Center. The team was established in 1926 as the Providence Reds.

About the XL Center

The XL Center is Connecticut’s premier destination for sports & entertainment.

The XL Center is also home to the AHL’s Hartford Wolf Pack, the primary developmental affiliate of the New York Rangers.

The XL Center will continue to be the center of sports and entertainment for Hartford and the state of Connecticut for years to come.