HARTFORD, CT – The Hartford Wolf Pack are excited to announce plans for the 2021-22 regular season, the franchise’s 25th as a member of the American Hockey League (AHL). As part of the season-long celebration, the Wolf Pack has designed and released a special 25th-anniversary logo that will be used throughout the season.

The logo incorporates the classic Wolf Pack primary logo, with a nod to the area’s naval roots. The uniform also includes the number ‘25’, indicating the milestone. Below the Wolf Pack lettering, the years 1997-2022 are listed. The Wolf Pack joined the AHL in time for the 1997-98 season, bringing professional hockey back to Hartford after a brief hiatus. 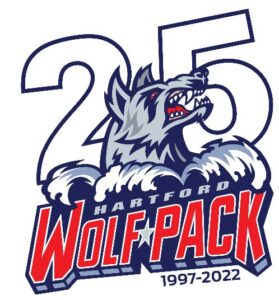 In addition to a special 25th-anniversary logo and ‘Opening Weekend’ festivities, the Wolf Pack will host numerous promotional events throughout the season. Among them, the organization will host its annual ‘Hockey Fights Cancer’ night at the XL Center.

The ‘Teddy Bear Toss’ also returns for the 2021-22 season, in addition to ‘Hartford Hockey Heritage Night’ to celebrate the game’s lengthy roots in the city.

The full 2021-22 promotional schedule will be released in three parts throughout the month of September in the lead-up to the 25th anniversary season. The first part was released on all Hartford Wolf Pack social media channels September 8th.

Single-game tickets for the 2021-22 Hartford Wolf Pack season will go on sale Tuesday, September 14th at 10:00 am. To secure your seats and join the fun for this milestone season, visit www.hartfordwolfpack.com.

ABOUT SPECTRA: Spectra is an industry leader in hosting and entertainment, partnering with clients to create memorable experiences for millions of visitors every year. Spectra’s unmatched blend of integrated services delivers incremental value for clients through several primary areas of expertise: Venue Management, Food Services & Hospitality, and Partnerships. Learn more at SpectraExperiences.com. Follow Spectra on Facebook, Twitter, Instagram, and LinkedIn.

ABOUT THE HARTFORD WOLF PACK: The Hartford Wolf Pack has been a premier franchise in the

American Hockey League since the team’s inception in 1997. The Wolf Pack are the top player- development affiliate of the NHL’s New York Rangers and play at the XL Center. The Wolf Pack has been home to some of the Rangers newest faces including Igor Shesterkin, Filip Chytil, and Ryan Lindgren.