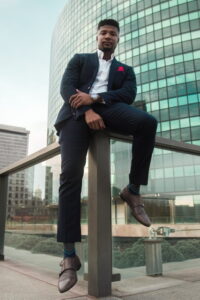 Jaylen Berry graduated from Wesleyan University in 2018. While there, he played football, became a Fellow at the Patricelli Center for Social Entrepreneurship, and was a resident advisor (RA). He also recognized his passion to support people of color and become a catalyst for mobility in his community.

MetroHartford Alliance Content Manager Nan Price spoke with Jaylen about growing up, earning his degree, and building a nonprofit in Connecticut.

NAN PRICE: You have roots here in Connecticut. Was the choice to grow your career here deliberate?

JAYLEN BERRY: It was extremely deliberate. That decision is in line with the mission of the nonprofit, which is to bridge the opportunity gap in the state of Connecticut. How do we enable “pro-mobility,” which encourages the socioeconomic upward movement of underrepresented people in the state?

It was always a key point for our work to not only be in Connecticut, but to be for Connecticut. I knew that even as I was heading toward the world of finance in New York. I always wanted to have roots sustained here in Connecticut.

NAN: You started the Foundation while you were still at Wesleyan. How did you develop the concept and how has it evolved?

JAYLEN: Yes, I was a sophomore when it started.

I grew up in the metro Hartford area and went to Windsor High School. I recognized that a lot of my buddies never got the chance to go to a school like Wesleyan. I spent a summer doing an internship in New York, where I was working for a pretty big firm. I was living a great life, but I knew people at home would never have that type of opportunity. It was a very honest reality to recognize at that age. That whole summer as I was interning, I tried to figure out what I could do to make a small impact.

My idea started off as a $500 scholarship fund. That’s all we raised our first year. I did that by talking to different people about what I was trying to do and just raising dollars. Our first scholarship was given to a student at Windsor High who recently graduated from Depaul University. From there, with the help of a strong team of special people, the small scholarship fund became an official 501c3 overall entity and here we are today.

NAN: You were a sophomore in college. How did you know how to build and create a nonprofit?

JAYLEN: I did basic Google research when I was starting out. Schematically, I leveraged knowledge that I had seen growing up. My mother owns two daycares in Hartford and Bristol. When I was growing up, at its peak, my father’s company was a top earner with the State Department of Children and Families in terms of government contracts and human services work. So, I was raised in this.

NAN: How did you get the community support and form partnerships as you were developing the scholarship?

JAYLEN: Our first few years, we were under fiscal sponsorship, which was a great way to get our foot in the door and build the entity. We got connected with pro bono partners and we later became an official entity. It took time and it obviously wasn’t a straight path.

I leveraged a few connections from my father. But a lot of it was just hitting the ground and doing a lot of networking. I was out there meeting new people, reaching out to Wesleyan alums, and talking about our mission from the heart.

NAN: Tell us about your experience as a Patricelli Fellow. How did you to become involved?

JAYLEN: When I was an RA, one of the students in my house was a Patricelli Fellow. One day, we hosted an event where we invited a faculty member to speak at the house. He invited Patricelli Center Director Makaela Kingsley. When I heard her talk about the Center I thought it sounded really cool because I was already doing the scholarship, but I was trying to figure out a way to standardize and formalize and gain real experience.

I became a Fellow when I enrolled in the Patricelli Center Fellowship class. It was great because I ran my business as a class. Not only that, through the Center I became connected to many high-level people. I think the fellowship is amazing because of the amount of information you’re given and the people you’re learning from. We’d have guest speakers who were directors and partners of pretty sizable companies. That type of experience is invaluable, especially for someone in college.

Wesleyan doesn’t have a business school, so the Patricelli Center is probably the closest thing to its business school. The Fellowship was the most pivotal class I took at Wesleyan because of the trajectory it put me on and the way it opened my mind.

It’s a great program that’s a direct fast track if you’re a student who is focused and doesn’t necessarily want to take the traditional route of working a 9-to-5 job. It was an extremely impactful program. Every school needs a Patricelli Center.