My Favorites
/ Jaxtapositions Paths to Treatment and Hope for Alzheimer’s

Jaxtapositions Paths to Treatment and Hope for Alzheimer’s 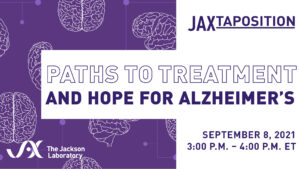 The Jackson Laboratory is holding Paths to Treatment and Hope for Alzheimer’s September 8, 2021.

The path to drug discovery for Alzheimer’s disease has been long and discouraging, but new research strategies and capabilities are providing renewed hope. Join JAX’s Kristen O’Connell for a discussion about how her research into the genetic differences that protect mice from cognitive decline could lead to promising drug developments for Alzheimer’s disease.

BJ Bormann, Ph.D., Vice President, Translational Science & Network Alliances
BJ Bormann joined The Jackson Laboratory, a nonprofit biomedical research institution, in 2017 with nearly 30 years of experience in both pharmaceutical and academic science, as well as leadership in biotech and pharmaceutical business development and licensing. BJ recently served as Senior Vice President responsible for Worldwide Alliances, Licensing and Business Development at Boehringer Ingelheim Pharmaceuticals, Inc., along with a number of positions at Pfizer, Inc. (NYSE: PFE), including Vice President of Pfizer Global Research and Development and the Global Head of Strategic Alliances. BJ has also served in the biotechnology area as CEO of Supportive Therapeutics, LLC, the CEO of Pivot Pharmaceuticals (OTC: PVOTF), and CEO of Harbour Antibodies based in the Netherlands. She currently serves on the board of directors of Bioline RX (BLRX: NASDAQ) and Xeris Pharmaceuticals (XERS:NASDAQ). BJ previously served on the Boards for CURE, CBIA, and BIO. BJ received her Ph.D. in biomedical science from the University of Connecticut Health Center and her B.Sc. from Fairfield University in biology. She completed her postdoctoral training at the Yale School of Medicine in the department of pathology.

Kristen M.S. O’Connell, Ph.D., Assistant Professor
Kristen O’Connell joined The Jackson Laboratory for Mammalian Genetics in Bar Harbor, ME in 2016. Prior to joining JAX, Dr. O’Connell was the recipient of a K99/R00 award from NHLBI and an Assistant Professor of Physiology at the University of Tennessee Health Science Center in Memphis, TN, where she built an NIH-funded research program to investigate the impact of body weight and obesogenic diets on the function and plasticity of hypothalamic neurons that regulate appetite and energy balance. At JAX, Dr. O’Connell has further expanded her research program to examine gene x environment (GxE) interactions, such as diet and obesity, on resilience and susceptibility to Alzheimer’s disease using the translational AD-BXD genetic reference panel to model genetic diversity. At JAX, Dr. O’Connell is also involved in collaborative efforts to create new models of Alzheimer’s disease and related dementias that better capture the complexity of this disease. She is currently on the executive committee of the JAX Center for Alzheimer’s Disease Research (CADR) and is a core member of the JAX Center for Addiction Biology. Dr. O’Connell received her Ph.D. in Pharmacology from the University of Rochester School of Medicine and Dentistry and her B.S. in Biology from Villanova University. She completed her postdoctoral training at Colorado State University.

Watch videos of past webinars.

The Urban League of Greater Hartford will host its Equal Opportunity Day Dinner & Gala on Thursday, December 8 at 6:00 p.m. at the Marriott Hartford. The organization’s signature fundraising event will honor six community leaders.

This week, we're getting the pulse about how @unitedwayinc is sparking innovative thinking for young professionals through the Emerging Leaders Case Competition. Joined by Point32Health and @HtfdSteamBoiler. Sponsored by @oakhillct.