The University of Saint Joseph in West Hartford is pleased to present “Visual Thoughts” Images of Current Events, an exhibition featuring the work of freelance photographer and digital artist H. Robert Thiesfield, Photographer on view until the end of the year. 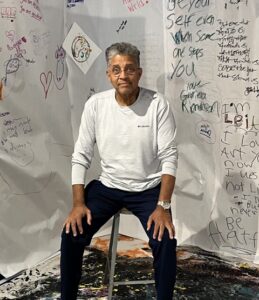 Thiesfield has been viewing life through a unique lens all life. Born in Queens, New York, Robert spent his early years in Haiti, until his family was forced to flee from the island nation’s violent and oppressive regime of Francois (Papa Doc) Duvalier. He was drafted from Brooklyn College CUNY, served in Vietnam, and attended the Germain School of Photography in Manhattan on his return.

After more than 25 years as a freelance photographer, Thiesfield’s work is represented in Corporate and Private Collections. Thiesfield is a photographer, and his company is H. Robert Thiesfield, Photographer, located in Rocky Hill, Connecticut.

Thiesfield is currently participating in the “Perspectives of Heritage” group exhibition at Workspace Gallery, Manchester Conn. and an ongoing project called “Connecticut Towns.”