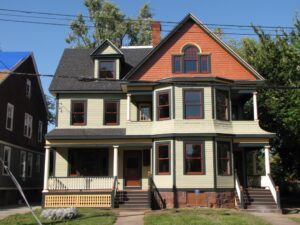 Hartford is filled with a rich history of innovation, culture—and homes. Hartford’s Asylum Hill neighborhood features a variety of architectural styles from the 19th century, including Queen Anne, Italianate, Colonial Revival, and Shingle-style homes. The neighborhood’s Sigourney Square Historic District has more than 200 homes listed on the National Register of Historic Places.

Since 2004, Northside Institutions Neighborhood Alliance, Inc. (NINA) has been working to revitalize Hartford’s Asylum Hill neighborhood, restoring blighted historic houses and creating affordable homeownership opportunities for low- to moderate-income families. The nonprofit organization represents a collaboration of some of the largest institutions in the city, including Aetna, The Hartford, Trinity Health of New England, and Webster Bank.

“The institutions had been working to improve Asylum Hill individually, but collectively they thought they could achieve even more. They looked at the Southside Institutions Neighborhood Alliance (SINA) model and saw how the collaboration of institutions there had resulted in significant improvements on the south side of Hartford,” explains NINA Executive Director Ken Johnson.

NINA was formed with a mission to address blight and serve as a catalyst for community reinvestment in the neighborhood. The organization’s first project quickly demonstrated NINA’s value. Aetna, in need of additional parking, initially planned to take down an 1890 brick Victorian located across the street from its world headquarters. Instead, Aetna donated the building to NINA, which moved the 300-ton building (affectionately dubbed “the Victorian Lady”) one mile across town to 21 Ashley Street, where it was restored as an owner-occupied single-family home.

“The move and restoration of the Victorian Lady attracted tremendous media attention,” recalls Ken. “It became the centerpiece of a multi-million dollar homeownership initiative that eventually included more than a half-dozen homes on Ashley Street. The whole event really helped shine a light on the extraordinary architecture and history we have here in Asylum Hill.”

NINA saw that architecture and history as a way to generate demand for homes in the neighborhood. “We recognized Asylum Hill’s historic housing stock makes it truly unique,” explains Ken. “It’s a legacy from the Victorian Age, when Asylum Hill was the premier residential neighborhood in Hartford between the Civil War and World War I. Governors and senators called Asylum Hill home during this period as well as captains of industry,” he adds. “Most people know Mark Twain and Harriet Beecher Stowe lived here but they may not be aware that a young J. Pierpont Morgan spent his formative years here on Asylum Hill.”

There’s a reason This Old House named Hartford’s Asylum Hill as one of the best places in America for first-time homeowners to purchase an historic home.

“Many of our recent buyers tend to be word of mouth and people who’ve heard about NINA and seen the houses we’ve redeveloped. They’re attracted to the energy of an urban neighborhood and sense of community we have here in Asylum Hill,” says Ken.

“Our houses get snapped up very quickly after they’re completed,” he adds. “For example, we received 12 offers for the four homes that comprise Hartford Heritage Homes, NINA’s latest homeownership project. Those offers came from neighborhoods across the city and from towns around the Hartford region as well as two from New York City.”

Karen T. Taylor, Director of Equity & Opportunity for the City of Hartford enjoyed the experience of working with NINA when she was house hunting. “I decided to work with NINA because of their reputation for building community and because of the quality of their renovations,” she says. “I was excited to get the best of both worlds, a historic home with all the updates—crown molding, modern paint palette, and beautiful landscaping. I also loved that local organizations contributed their resources and efforts to building my home.”

Karen notes that she chose the Asylum Hill neighborhood of Hartford because of its proximity, people, parks, and price. “I’ve lived in Hartford for most of my life, and I’ve grown to appreciate the cultural diversity,” she adds. “I also love that nearly every corner of the city has a beautiful, lush park to enjoy.”

Hartford lover Chion Wolf moved to an apartment in Asylum Hill in 2010, after being hired by Connecticut Public Broadcasting. “Ten years later, my career, social life, and commitment to the city have grown,” she says. “Through NINA, my wife, Emily, and I bought a new house right down the street from the station! There’s something about this city—it’s such fertile ground to grow.”

NINA’s work extends beyond rebuilding and into creating a spirit of neighborhood pride. The organization has worked with neighbors on issues like porch repairs and engaged an entire block in a landscaping project in which NINA recruited professional landscape designers to work with homeowners to create pocket gardens in front of their homes.

“We like to work with the surrounding neighbors because, rebuilding the house is great, but when it becomes contagious and neighbors start renovating their own homes, that’s when we really think we hit a home run,” emphasizes Ken.

He notes that when NINA relocated the Victorian Lady to Ashley Street, a month later the next door neighbor painted their house. “We celebrate those little victories, where people are investing into their homes because they have confidence that the neighborhood is growing and it’s worth investing in.”

Photo
Built in 1897, this two-family home occupies a prominent location across from Sigourney Square Park. It had been a 10-room boarding house before NINA acquired it from the lender. (Winner, 2013 Hartford Preservation Alliance Award for historic rehabilitation.)