Founded in 1897 by the Sisters of Saint Joseph, Saint Francis is an anchor institution in Hartford
HARTFORD, Conn. (August 26, 2022) – Saint Francis Hospital, a member of Trinity Health Of New England, is celebrating its 125th anniversary. Founded in 1897 by the Sisters of Saint Joseph of Chambery, what began as a modest four-story brick building on the corner of Woodland and Collins Streets has grown into what is now the largest Catholic hospital in New England. An award-winning teaching hospital which boasts a Level I Trauma Center, and several nationally recognized services, Saint Francis remains committed to the Mission-driven care first established 125 years ago. 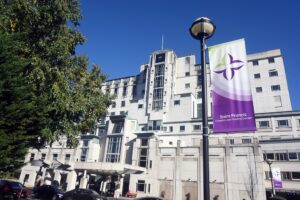 “Saint Francis Hospital has been an anchor institution in Hartford for 125 years, where our colleagues and providers live our Mission and Core Values each and every day,” said Thomas Burke, BPharm, M.B.A., President of Saint Francis. “While so much has changed between the time the founding Sisters arrived in Hartford to today, the identity and driving force behind the way patients are treated within our walls has never faltered. We remain committed to providing the safest, most innovative, value driven care that supports mind, body, and spirit. And, no matter the circumstance, every patient who comes through the doors of Saint Francis will receive top-of-the-line care, in a safe environment, at a reasonable cost.”

In honor of the 125th anniversary, Saint Francis planned several events to celebrate. On Thursday, August 25, the hospital’s founding date, Saint Francis held a colleague appreciation barbecue in honor of their work to carry on the Sisters of Saint Joseph’s legacy. On Friday, August 26, leaders, colleagues, and special guests gathered to dedicate a time capsule, which was filled with mementos, letters, and other memorabilia. The time capsule was buried in front of the hospital and covered with a plaque which instructs future colleagues to open in 25 years at the 150th anniversary. Finally, on Saturday, August 27, 125 years after Saint Francis welcomed its first patients, a special Mass will be held at Saint Joseph Cathedral in Hartford, honoring 125 years of providing Mission-based care for the greater Hartford community.

Saint Francis has seen many changes in its 125 years of existence. The hospital was founded on the direction of the Archbishop of Hartford, who saw the need for a place where Catholic immigrants could receive care. It has survived two global pandemics – the Spanish Flu pandemic of 1918, and the COVID19 pandemic which began in 2020 and is still being fought in 2022. There have been incredible advances in research and technique and the development of clinical care models that provide the most innovative care in a safe environment, supporting mind, body, and spirit.

Since its founding, Saint Francis has been known for providing award-winning care. For ten consecutive years, Saint Francis has been named a Best Regional Hospital by U.S. News & World Report, and in 2022 was a High Performing Hospital in nine specialty areas. Earlier this year, the hospital was recognized for the fourth straight year on Newsweek’s list of World’s Best Hospitals, ranking 158 out of 414 hospitals in the United States. Saint Francis has been named nine times to the Fortune/IBM Watson Health 100 Top Hospitals® list as one of the 15 Top Major Teaching Hospitals and was the only hospital in Connecticut to be recognized in 2021. Most recently, the hospital was named a Center of Excellence by the State of Connecticut Health Plan for hip replacement and revision and knee replacement and revision. These designations, which recognize and reward demonstration of superior quality of care, came after Comptroller Natalie Braswell announced that the health plan launched the next phase of its innovative value-based care payment program, aimed at improving the quality, affordability, and experience of health care for hundreds of thousands of state employees and retirees.