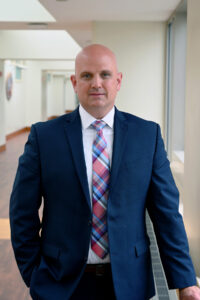 The MetroHartford Alliance (MHA) recognizes and honors newly appointed leaders in our community, including Saint Francis Hospital President Thomas Burke, who became Interim President in May 2020 and, in November 2020, was named President after an extensive search.

MHA Content Manager Nan Price spoke with Thomas about how the organization has thrived during the COVID-19 pandemic and where he sees the future of Hartford.

NAN PRICE: In what ways is Saint Francis Hospital making an economic impact in our region?

THOMAS BURKE: When you think of Saint Francis traditionally as a four-walled hospital, we certainly are one of the larger employers in the Greater Hartford area. As we emerge from the pandemic, we’re re-evaluating the ways in which we deliver care.

Our footprint, which has existed along Woodland Street and Asylum Avenue for more than 100 years will remain, but there will be some significant changes. We’re planning to push the delivery of care out further into the communities we serve—those communities surrounding Hartford and communities within Hartford itself that aren’t right here in this corner of the city. So, over the next three to seven years, there will be a transformational change in the campus here and where care is delivered.

This planning has been going on for years and we’ve seen a trend across the country to move away from the acute care setting and large buildings into smaller ambulatory centers in the community. The pandemic enabled us to take a pause for a year to reevaluate. We’ve seen the net effect of the pandemic on society as a whole. We’ve seen a much more rapid uptake and acceptance of virtual care and electronic communication with providers more swiftly than we had ever anticipated.

In addition, like every other industry, a portion of our colleagues were forced to work from home during the pandemic, and we’ve seen how productive and successful and mutually beneficial that can be. That has also helped us reevaluate what our campus is going to look like and where we’re going to provide that care.

In many cases, the care will roll out to the communities. It will become more virtually focused and the same effect will happen on some of our support staff in the background. Many of those who are working from home now, will be allowed to do so going forward indefinitely, which will obviously change the amount of infrastructure we need here on campus.

NAN: You stepped into this new role in the midst of a pandemic. Tell us a little about that experience.

THOMAS: Jumping in during the midst of that first wave of the pandemic was nothing like I could’ve ever imagined. There were so many unknowns at the time. There were operational challenges and we didn’t know if there would be a second wave or the timing of if and when a vaccine would be available.

For me, it all comes down to the basics of leadership in any industry. And that’s having open, honest communication and empathy; sharing what you know and what you don’t know; and talking about your concerns on many different levels. I think that was the most important thing we could’ve done. And retrospectively, I think we did that. And that’s allowed us to emerge from this pandemic stronger and more adaptable than we’ve ever been.

NAN: Where do you see the benefit of being a Leadership Investor with the MHA?

THOMAS: The transition healthcare and Saint Francis are going to go through in the next three to seven years, theoretically, is happening in the city. Being represented by the MHA gives us a seat at the table not only to talk about what we’re going to do differently, but to be part of the discussion around what’s happening in other industries. It’s beneficial to have executives or leaders at the same table to provide our input about what we think is important to move forward as that organization helps reshape the city in the years to come.

NAN: Speaking of the years to come. You talked a bit about the future for healthcare. Where do you see the overall future of Hartford as the city, and the rest of the world, is coming out of this pandemic?

THOMAS: For the future of Saint Francis, the vaccine efforts are obviously changing who we are right now. Saint Francis has administered more than 90,000 vaccines in our hospital- and community-based mass vaccination clinics in Hartford. Over the next few months, those mass vaccine clinic efforts will start to transition into a physician office setting, thanks to our Trinity Health Of New England Medical Group team.

For more than 120 years, our mission has called us to serve as a “transforming, healing presence” to our community and the members of our multidisciplinary vaccine team have not only fulfilled this commitment, but they have also provided an invaluable service to the local community when they needed it most. Now, the focus can shift to the needs of patients who put off preventive care, procedures, and so on. We can re-energize our plans to system and facility improvements and innovate on next steps in a post-pandemic era. We’re once again adapting to the needs of our local community and serving them where and in the ways they need it most.

In terms of the future of Hartford, I think it’s exciting. There are a lot of things in the pipeline related to transportation, culturally, and from an economic development perspective. This is a relaunch or a new day for the city. I think that’s one of the things that the pandemic has done. It’s given us a chance to of step back and now step out and put a new foot forward.

I’m enthusiastic about all that the city has to offer and will over the next few years. One of our responsibilities being part of the MHA is to help create and sustain that energy around those efforts in the community and beyond. And I think that’s important.