Twenty years after the tragic events of 9/11, The Salvation Army remembers the victims and heroes of the terrorist attacks and their loved ones. 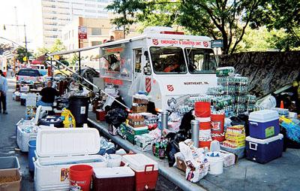 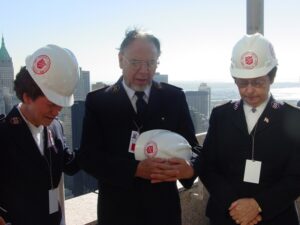 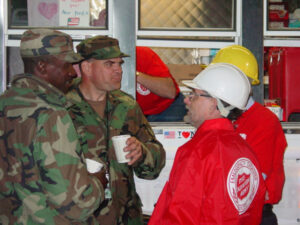 Arriving within a half-hour of the first plane hitting the North Tower of the World Trade Center in New York City, The Salvation Army was one of the first relief organizations to arrive on the scene at Ground Zero. Salvation Army officers and staff provided extensive support for relief workers and volunteers. The Army continued to assist recovery efforts throughout the months-long clean-up process. In the months and years that followed, The Salvation Army helped thousands of people impacted by the September 11 attacks with practical assistance as well as spiritual and emotional care.

Salvation Army officers and staff from around Connecticut remember their time serving at Ground Zero in the weeks following September 11th.

Major Gilbert Parkhurst, Corps officer for The Salvation Army in Danbury recalls that the gravity of the situation didn’t really hit him until he emerged from the Lincoln Tunnel. “Prior to entering the tunnel, traffic was at a standstill. As we came out the other side, the streets were devoid of traffic except for emergency personnel. That’s when it really hit me.”

Once Major Parkhurst arrived at the scene, he began handing out food and water.  It didn’t take long for him to realize that besides handing out food and refreshments, what many of the emergency personnel really needed was someone to talk to. “As we brought food to those that we were serving, it was clear that people who were coming to the canteen truck just needed someone to listen to them,” recalls Major Parkhurst.

“One evening, I came across a fireman that was kneeling and crying. As I walked up to him, we began to talk. He shared that he had lost all of his men in the towers. I placed my hand on his shoulder and just let him talk.”

Mike Orfitelli, former Director of Emergency Disaster Services for The Salvation Army Eastern Territory, remembers a Christmas memory from Ground Zero that has stayed with him 20 years later.

“I took a quintet to New York City where we played Christmas carols. The poignant moment for me was standing at the entrance of Ground Zero and watching the first responders and iron workers file past us, moved by the beauty of the carols amidst the devastation and destruction all around us.  It’s a moment I will never forget.”

Joyce Hodson, former Development Director and Emergency Disaster Services Director for The Salvation Army served at Ground Zero one month after the attacks. “Governor Rowland called upon The Salvation Army to work with our colleagues from other agencies, to ensure that Connecticut was ready to respond – not only to what was happening in New York, but what had happening to Connecticut citizens who worked in New York.  153 Connecticut citizens died in New York that day.  Their families were contacted by The Salvation Army in the hope that we could help them spiritually and with monetary support, or truly, whatever they needed.  Many had the means to deal with such a tragic loss, many did not, but the fact that someone was there to work with them and pray with them was a mission we were privileged to provide.”

Hodson goes on to say, “What happened in 2001 would become part of our hearts, our minds, and gave us an opportunity to learn from these experiences and better serve people in the future.”

As Americans know, we have come a long way since 9/11. People emerged from the tragedy a more unified nation more willing to help their neighbors in times of great need. As we remember the tragedies of September 11, The Salvation Army will carry on that tradition and continue to help people in need.

About The Salvation Army

The Salvation Army, an evangelical part of the universal Christian church established in London in 1865, has been supporting those in need in His name without discrimination for more than 130 years in the United States. Nearly 30 million Americans receive assistance from The Salvation Army each year through the broadest array of social services that range from providing food for the hungry, relief for disaster victims, assistance for the disabled, outreach to the elderly and ill, clothing and shelter to the homeless and opportunities for underprivileged children. 82 cents of every dollar The Salvation Army spends is used to support those services in 5,000 communities nationwide. For more information, go to www.salvationarmyusa.org.