TheaterWorks Hartford was recently awarded 7 Connecticut Critics Circle Awards including a special award for Innovation during the pandemic. Also of note, the summer 2021 production of “Walden” (a New York Times Critic pick) swept the awards with 5 wins for best play, outstanding director, sound, set and lighting. “Walden” was an outdoor immersive produced in partnership with support from Riverfront Recapture on the banks of CT River.

Additionally, awards for outstanding actor in a play went to Damian Thompson for TheaterWorks’ production of “This Bitter Earth”. Finally, Rob Ruggiero, Artistic Director of TheaterWorks Hartford, was presented with a special award for the outstanding, high quality streaming productions staged by the theater during the 2020-2021 season.

TheaterWortks is excited to close its 2021-22 Season with the World Premiere of “Secondo” written by CT playwright Jacques Lamarre, directed by Rob Ruggiero and starring Antoinette LaVecchia. “Secondo” is the sequel to audience favorite “I Loved, I Lost, I Made Spaghetti”, and runs now through August 29, 2022. 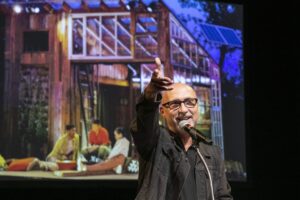