My Favorites
/ This Is My Hartford: Andréa Comer

This Is My Hartford: Andréa Comer 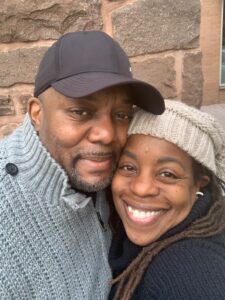 Andréa Comer is Deputy Commissioner at the Connecticut Department of Consumer Protection. Here, she shares about her love for Connecticut’s capital city.

ANDRÉA COMER: I majored in journalism and moved to Hartford in 1993 after a fellowship landed me at The Hartford Courant. I just fell in love with the city. There are so many different people and there’s such a different vibe. I grew up in New York, which made me appreciate the diversity cities offer. But it’s also very hectic and frenetic. Hartford’s pace is much more my speed.

ANDRÉA: I’ve become a part of Hartford in large part through my service. I’m on the Hartford Public Library board and serve on the Hartford Democratic Town Committee. Those volunteer experiences and others have allowed me to engage with the community in a deeper way. I also served on the Hartford Board of Education, which provided me with a sense of what the needs of families and students are in Hartford.

I’ve lived in every district in the city, so I’ve gotten to see the beauty of the people and the neighborhoods throughout. I’ve also formed some amazing friendships and built a really supportive network. That’s how Hartford has become a part of me.

What impact do you make here in the region?

ANDRÉA: Professionally, it’s through my current role at the Connecticut Department of Consumer Protection and chairing the Social Equity Council, which was established to not only encourage equity in the cannabis industry, but to also set up systems and programs that will benefit those who have been most impacted by the war on drugs. Hartford has definitely had its it struggles, especially in some neighborhoods where that war has impacted them for decades. But all my professional roles have been about creating space and leveling playing fields, and that’s the impact I hope to have here.

ANDRÉA: The variety and strength of its neighborhoods. Living in Parkville reminded of Queens, NY, with its diversity and cultural influences. Living in the North End, I would walk through Keney Park most mornings, grab some West Indian food, and talk with my neighbors. My daughter was in second grade when we lived in the South End, so I’d take her to the parade or to the holiday lights at Goodwin Park. Now I live downtown, and being close to work, restaurants, and all the activities in Bushnell Park is perfect for my husband Brad and me. In every neighborhood, you find a sense of community in different ways.

I really feel as though Hartford is underrated. It’s got a good food scene, there’s plenty to do, and I’ve seen so much growth since I first moved here. So, I think we’re at an inflection point and we can continue to move forward.

How do you tell the story of Hartford?

Hartford is one of those places that, in the very near future, will be a destination. It’s that perfect blend of small but with some big-city attributes. And I tell people there’s almost always something to do in Hartford. You just have to be willing to explore.

Photo: Andréa Comer with her husband, Brad, enjoying Hartford’s Republic at The Linden.