My Favorites
/ This Is My Hartford: Joel Lohr

This Is My Hartford: Joel Lohr 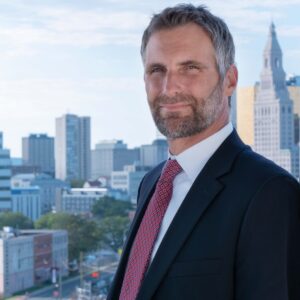 Joel N. Lohr moved to the Hartford Region in 2018 when he became President of Hartford International University for Religion and Peace. Here, he shares about what he finds unique about the region.

JOEL LOHR: I was drawn to Hartford through my work. I love the fact that Hartford International is this historic institution that is somehow influenced by, if not the result of, Hartford itself.

I was drawn to this unique way of doing religious studies that’s right here in Hartford. It really is distinctive in our country.

What impact do you hope to make here in the region?

JOEL: If I can play a role in continuing the legacy of Hartford International and learn from it, somehow that will be a realized goal. When I first came to what was then called Hartford Seminary, people would ask me about my vision for the organization. I always responded with the same answer: This place already has a vision that is big and bold. I want to be part of it and further it. It’s not my mission; it’s already here.

What are the next steps? What are the next “firsts” for us? What’s continuing to put us on the map? I want to make meaningful headway in our mission and learn from not just Hartford International, but from the city. I think there’s something special about Connecticut and the City of Hartford that many people don’t know about—sometimes even when you live here. But when you learn about our history and unique achievements, you realize it’s an exciting place to be.

JOEL: On a personal level, it’s also been quite fun for us as a family. My wife and I were born in Canada and lived there until our first year of marriage. Our daughter was born in England when we were living there for five years. We’ve now made Hartford our home—and that hasn’t been a hard thing to do. We’ve talked about staying here long-term. This isn’t a stopover for us. We feel really at home here.

JOEL: When people ask me what Hartford is like, I often say it’s a city in the middle of a forest. It has beautiful rolling hills. There are so many places you can get to within minutes to go for a hike. You can be on the ocean in about an hour. You can be in New York or Boston in about two hours. And yet we have enough here to really keep you engaged—culture, restaurants, shows, interesting people.

There’s so much here that’s become part of us. It’s hard to imagine living in a big city again. I’ve spent time in Toronto and Vancouver and now I’ve become accustomed to the conveniences of this interesting smaller city, which has so many of the conveniences of a bigger city. But without the traffic!

I think Hartford is also unique because it’s a place where the Hartford Whalers once were. It’s somehow part of our identity to this day, but maybe that’s just the Canadian in me talking! I also love that it has a thriving Jewish community.

On that topic, I think Hartford is a place where neighbors mean a lot to us, perhaps because we’re small and in a kind of “in between” place. I’m not sure why that is, but when you’re in a big place like New York or Toronto, you don’t really pay much attention to those things. But when you live between two larger cities, you’re often aware of that, and maybe it makes you want to prove yourself or live up to something. I think it makes you want to do something with the opportunity to grow. It can also give you a “we’re in this together” mentality, which builds community.

And I love the fact that the Mark Twain House and Museum and Elizabeth Park are nearby. We live a few minutes from the downtown core and yet we can also easily go to West Hartford and have a different experience. It’s a very diverse city in ways that many cities are, but I think the small size allows you to get to know it all a little better.