My Favorites
/ This Is My Hartford: Joseph Linhart

This Is My Hartford: Joseph Linhart 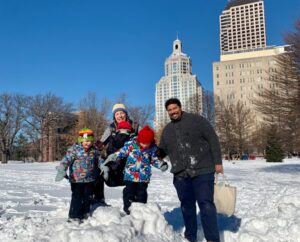 Joseph Linhart is a Senior Community Planning and Development Representative at the U.S. Department of Housing and Urban Development (HUD). Here, he shares what he enjoys about his involvement with Hartford both personally and professionally.

JOSEPH LINHART: We moved from Brooklyn to Hartford in September 2019, when our second child was on the way. My wife grew up in the West End and lived here for a while after college, so we had some ties here. I knew there was a lot to do in the area, and I remember thinking: I can make Hartford work for me.

JOE: We moved here shortly before the pandemic, so we haven’t fully experienced all the music and the street life I know exist in Hartford. I’ve gotten little tastes and I constantly want more.

So far, Hartford’s been really great for our family. Geographically, we’re in a great position where we have the option to not only enjoy our city, but enjoy what’s around it. We love the parks, museums, and the Connecticut River. And we’re excited about the possibility of more restaurants and more shopping.

I like that we live in an urban environment. But unlike Brooklyn, where it’s a two-hour drive to get to nature, we have access within 15 minutes. I also like that there’s a nice corridor between New Haven, Springfield, and Amherst. We’re up to a family of five now, so we like getting in the minivan and exploring!

The other thing is, even with the pandemic, we’ve been able to really generate a great community. We’ve run into parents and kids we know everywhere from the local farmers’ market to the Wadsworth Atheneum Festival of Trees. It always feels like a West End reunion. I never had that sense of community in Brooklyn.

What impact do you hope to make in the Hartford Region?

JOE: In terms of my professional life, obviously, I have no say in how HUD dollars are spent, but I see how it’s impacting the community. I see what different communities are trying to do and I see how Hartford is trying to use its HUD dollars to help transform the area.

I feel like there’s a lot of momentum behind Hartford. It’s interesting because I feel like I might actually have a chance to personally be a part of that.

I love New York City and I miss it. But in some ways—because it’s so large—it’s all things to everybody. And then it’s nothing to nobody. Here, there’s an accessible entry point where you feel like you can actually make an impact.

For example, I reconnected with someone I used to play music with in college who lives in the area. We got together with a couple of guys in the neighborhood and now have our own dad band, Kenyon. I always wanted to get back into playing music. I found it challenging to make those connections in Brooklyn. Within a week here, I was meeting people and making connections.

Since we’ve been here in Hartford, I’ve gotten involved in the West End Civic Association (WECA) and the Farmington Avenue Alliance (FAA). With both organizations, we’re trying figure out how we can impact and shape the neighborhood. I’ve been really excited. I have a lot of ideas for the West End and our neighborhood. WECA does a lot of good community initiatives. I would love to see some more events happening and I would even love to be a part of planning.

I love being part of something that can help promote and develop our neighborhood into a vibrant enclave of businesses. Most downtowns are complimented by a few other neighborhoods where people can walk around. And there’s already a certain vibrancy with other areas. For example, West Side Park, a new food truck park is planned for spring 2022. It’s going to be located at the corner of Gerard and Farmington, which used to be a gas station.

It’s not just community initiative or events. There’s also development. How can we shape the neighborhood to feel like it has a certain excitement and movement to it? Especially because a lot of families like us have moved in recently. I like the idea of us being the next generation to shape what we think our neighborhood and ultimately the city could be.