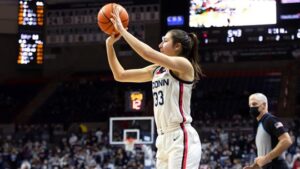 Cheer on the Huskies on February 6th at the XL Center!

Tickets are only $18 – use promocode HUSKY1

Feel free to share with employees, colleagues, and sports enthusiasts!

Attendees must display proof of COVID-19 vaccination or a negative test beginning January 15.

The UConn Huskies are the most successful women’s basketball program in the nation, having won a record 11 NCAA Division I National Championships and a women’s record four in a row, from 2013 through 2016, plus over 50 conference regular season and tournament championships.

They are in the Big East Conference, and have taken part in every NCAA Tournament since 1989; as of the end of the 2018–19 season, this is the third-longest active streak in Division I

UConn’s current head coach is Luigi “Geno” Auriemma, who joined the team in 1985. Coach Auriemma is one of the most successful coaches in college basketball: his 1119–144 (.886) record as of April 2021 represents the highest winning percentage among NCAA basketball coaches (minimum 10 seasons), any level, men’s or women’s while ranking him second in all-time women’s wins behind current Stanford coach Tara VanDerveer.

Read the UConn Husky Blog about the current season.

On the UConn Huskies Women’s Basketball website you can see video highlights of their games, their season stats, and more.