My Favorites
/ Unsung Presents: Music and the Movement

Unsung Presents: Music and the Movement

Comcast, TV One, and NBC Connecticut host a virtual screening of part one of the two-part series, Music and Movement followed by a panel discussion Tuesday, February 23 at 6 pm.

Speakers for this engagement include:

A link to the live event will be shared prior to event date. 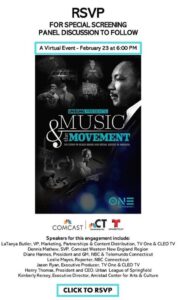