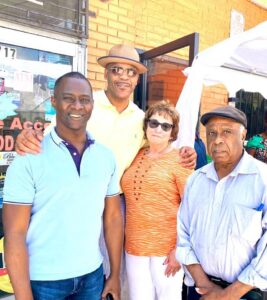 Upper Albany Main Street (UAMS) was established in 2000 as an economic development and community revitalization organization. Marilyn Risi has been Executive Director at UAMS for 22 years. She spoke with MetroHartford Alliance Content Manager Nan Price about the evolution of the organization—and Hartford—over the past two-plus decades.

NAN PRICE: Can you provide an overview about how things have evolved in the Upper Albany area since you’ve been involve with UAMS?

MARILYN RICCI: In the 22 years since I’ve been the Executive Director, the avenue has grown with businesses with the help of our Micro Business Incubator program. We serve an average of 50 businesses a year in the areas of business planning, marketing, fiscal literacy, inventory, and other aspects of small business.

Many of these businesses have grown. Some now have more than one brick-and-mortar store. We’ve seen others open second locations within and outside of Hartford.

The avenue’s appearance has changed, too. One of the largest streetscape projects that has ever been done in the state of Connecticut was done on Albany Avenue from Westbourne Parkway to Bedford Street, both sides of the street. The $30 million project included decorative street lighting; enhancements to the sidewalks and curbs, including bump outs and bricks; pedestrian amenities; and additional benches and bus stops, which has made the avenue look a lot more attractive for economic development.

We also received a façade improvement grant from the state through the State Bond Commission back in 2017, which we used to upgrade façades on four or five buildings on Albany Avenue.

The abandoned buildings that were within the Upper Albany Main Street area, such as the old Thomas Cadillac site, became the site of the University of Hartford’s premiere Handel Performing Arts Center, which compliments The Artists Collective and the Jackie McLean Institute of Jazz at the University of Hartford Hartt School. And the historic Sealtest milk plant is now the location of Chrysalis Center, which provides support services to people in need.

The community health services also has also grown with a lot of public and private investment. For example, the YMCA opened a brand new facility on the corner of Bedford Street and Albany Avenue. And now we’re looking at additional things coming to the avenue, like the North West Jones School, which will become an annex to the Hartford Public Library. The city of Hartford is working on stabilizing the building and getting it ready. Also, the corner of Albany and Woodland will be the home of the City of Hartford’s health department and a sit-down restaurant, bank, and possible drugstore.

NAN: How was UAMS involved these improvements?

MARILYN: UAMS has provided a design committee meeting every month for the past 22 years. We’ve been involved in coordinating the streetscape projects and providing community input into many other projects that are being supported by the city and or state.

Our monthly meetings include representatives from the city, state, and the other agencies, including the MetroHartford Alliance, Hartford’s Neighborhood Revitalization Zones (NRZ), and the Blue Hills Civic Association, along with stakeholders from Saint Francis Hospital, the University of Hartford, and other local businesses. They have the opportunity to provide input into the development of the avenue, rather than someone coming in and telling them what is going to happen.

There have been many changes to both the city and to the Upper Albany area, but the mission remains the same. We are mission-focused. We support the residential issues. However, our main focus is to be a “one-stop shop” for the business owners lining Albany and Homestead Avenues.

We really stepped in during the pandemic when business owners needed help with emergency grants. We serviced more than 100 businesses. Each one of them got $7,500 to assist them through the COVID-19 downturn when many had to close shop and deal with challenges related to the pandemic.

NAN: What would you say is your biggest accomplishment with this organization?

MARILYN: The investment in the community. The University of Hartford coming to Albany Avenue—that was a big deal. And to see the growth of some of the small businesses. That gives you a lot of pride.

Our job has always been to improve what is here and attract that which will be complimentary. And what came provided more business to the existing businesses. This is a very important piece, because it’s always been about economic development.